It has been difficult finding or deciding what to post on this blog. Our early and mid-summers were colder and wetter than usual. Hence, some stunted vegetation. Now that the days have warmed the temperature is reaching for all time records. When it is so warm the wind blows it is like the wind is simply sucking the moisture right out of any vegetation. The crepe myrtle which have amazed me with their beauty the past two summers are a little wimpy in color and mass of bloom. Other summer blooms are likewise lacking in typical flash. This strange summer has put me in a funk that makes appropriate posts improbable. Add to this felling a bit homesick I have stayed away from the blog.

The past few weeks I have been thinking a lot about my mom, about some of things we have done that I know she would have enjoyed, about her birthday, her mannerisms, her reactions to having even more great-grandsons and just that I miss her. These feelings have been more frequent lately as I wonder about one of my oldest friends dealing with some heavy issues in placing her mother into an assisted living facility. I thought about writing in this blog about what I have been feeling but decided not to for several reasons. So, you can imagine my reaction this morning when I checked one of the blogs I regularly read. There, right before my eyes, was my favorite picture of my mother when she was a child. Even more surprising was the title "Who is Moggie Loggin?" I first wrote about Moggie Loggin just a few days before her passing. 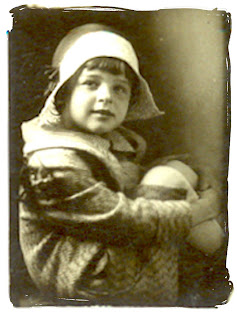 Well the mystery as to how that tiny little picture got to Portland, Oregon from here is solved. I am sure that it was in an envelope I used to send my friends information about our area. They will be visiting soon. At first I just could not fathom the picture being there and then I remembered that I had pulled a print of that picture out of the envelope and thinking, "How did that get there?" I do remember that I came across the little photo in much the same way Terry did. In the early fall of 2006 it appeared on the floor after I had spent a few hours going through some old photos that somehow ended up in my possession. I remember being almost mesmerized by the picture because I had never seen it before and because it captured the essence of my mother throughout her life.