The temperature today has been most pleasant. We just went to the Concert in the Park and heard 50's & 60's music. The cooler weather and sounds of the music made for a pleasant time. The music was most appropriate when I saw this car that brings back special times to me. 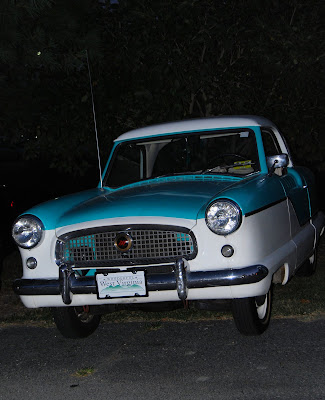 When I was in college only a very few sorority sisters and/or there beaus had vehicles. Our outings out were often adventuresome and when I look back after 40 years some of those outings were probably very dangerous. We were young, foolish, having a good time and in need of transportation. There we were at Idaho State University in Pocatello, Idaho and we needed to get from one spot to another. Somehow we always managed but there were those moments that were more memorable than others. Mary, who was from Pocatello, was one of the few with wheels. To know Mary was to love her. She had an old Metropolitan. One very similar to the photo but her car as I remember was yellow and white. That car at its very best is a two-seater. I recall squeezing sometimes five bodies into that car. When it was crowded like that I did not ride with the others. Instead, I folded myself as compactly as I could and rode in the "trunk" area. All I remember is saying a prayer that we wouldn't be in a crash. I just knew no one would ever find me back in my spot.

Those were wonderful times and I am reminded of them whenever I see this funky little car. I wish I could still fold myself up into such a small space. Oh, well.

That car looks more like my Mom's Nash Rambler that I drove in college. It was black and I remember you folding into the trunk of that one too! Then Mom traded it in for the sleek '67 Cougar. We were pretty classy when she'd let me drive that car!

Good heavens, my Aunt Eleanor, who drove like a bat out of you-know-where had a car like that. We lived next to a mountain and the road came down a long hill; I have some kind of memory of that car barreling down that road, scaring everyone out of their wits. Maybe it is just a family story. Anyway, the photo brings back memories. June