I Was So Excited I Missed It

Today I came across something that initially was a curiosity and upon closer observation it was amazing. I was going to get Bill from work and had decided to go another way because it was early and I was on a quest to get a photo of a sassafras tree. There is supposed to be one of the largest in Delaware right here in Milton. I made the turn onto the back road and saw what I thought to be a large turkey vulture by the side of the road. Since the traffic was non-existent I drove slowly and pulled off the road beside the bird. To my utter amazement it was a bald eagle feeding on some road kill. He was just standing there in all of his glory. I pulled my camera out of the case, took off the lens cap, pushed the button for the wrong window, raised the back window so the dog would not bark, and missed the shot. By the time I got the view finder to my eye I was shaking so badly I missed the shot. Never had I been so close and yet so far. 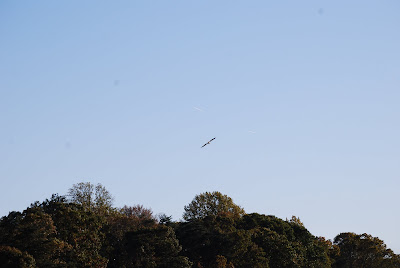 The ironic happening was that earlier in the day I had been out and took several pictures of the beautiful autumn leaves and changing countryside. When looking through my photos I saw a bird in a few taken very close to where I saw the eagle. I am sure I caught the eagle in flight earlier in the day. That's him right above the tree line. 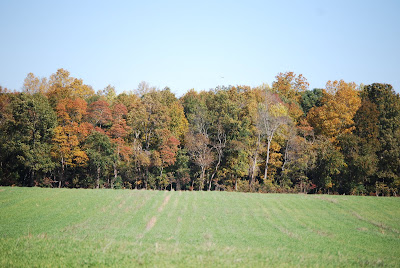 I know several people saw this majestic animal because several cars on our return visit were pulled alongside the road in the same place all with eyes peeled to the sky and then down on the field. Maybe another time now that I know he is here.

By the way, I could not identify the sassafras tree.