On November 2, two days before the election, we got a call from our daughter and son-in-law saying that we were going to the Inauguration. They were very confident about the outcome. They had it all figured out how we were all going to embark on this journey. It included getting a wheelchair for me so they and Bill could make good progress. I would hold the (yet unborn) baby so a stroller would not be required. That was before it became evident that the swell of humanity attending would make those plans unfeasible. We also were unsuccessful in attaining tickets to the event. Geoff did receive an official commemorative invitation to the event. Although we were not going to the actual event we wanted to be in the area anyway so we went to Arlington last Saturday.

Besides wanting to be close to the action, this gave us an opportunity to get in some good grandparents' time hugging our grandson. While Erica and Geoff headed off to a Clinton/Gore alumni function Bill and I got to sit with precious baby boy. 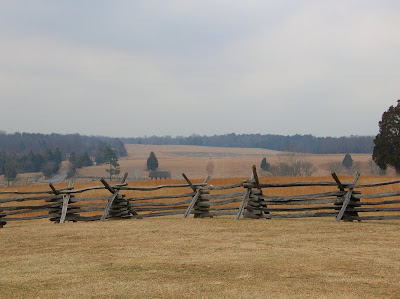 On Monday Bill and I drove to the Manassas Battlefield. This was our first visit to the site. It is a beautiful spot but also a sobering monument. Being there at the site of the first battle of the Civil War seemed to be the right place to be on January 19, 2009. It is difficult for me to articulate my feelings here but when we got back to Arlington and looked at the photos I had taken I was taken aback by the image below. I had been snapping a photo of just the Stonewall Jackson statue or at least that is what I thought. I did not realize that anyone else was there. The gentleman also taking a picture somehow seems so symbolic of the day. Perhaps we have reached a point where we will (to paraphrase Dr. King) "…no longer be judged by the color of our skin but by the content of our character." 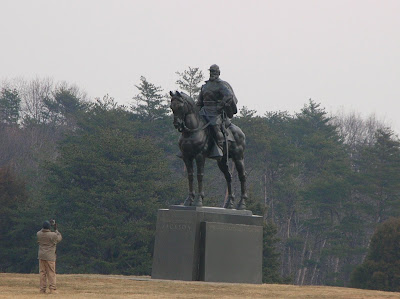 I awoke very early on Inauguration Day. Geoff had decided he was going to the ceremony and would catch the Metro at 4:00 a.m. I heard him upstairs and knew he left around 3:45 a.m. I worried about him because it has been so cold and it was still at least seven hours before the ceremony would start. I got even more concerned after I turned on the TV to see that some Metro stations had very long lines that early in the morning. I continued to watch the news shows and was glad I was not among the throngs. It was very cold and there was no place to sit. Then, once the ceremonies began and the sea of people and flags were shown I was regretful. I got chills as President spoke and there were images of people my age and older with tears running down their faces. A barrier once thought impenetrable had been moved aside.

Geoff got home in the late afternoon cold, tired, sore and completely excited because he had been there. That enthusiasm that exists in spite of the incredible obstacles we are facing today gives me every reason to hope and that there will be a better day.

As we were watching on Tuesday, Ray said, "I wonder if Bill and Carla are there!" We looked for you in the crowds! Well, at least you were close and I figure we were all there in spirit. What a wonderful day that was. I was teary-eyed all day. Aretha 'bout did me in!

I was there too and amiss that I didn't catch up with Geoff (as though, somehow, I would be able to find him!). There is always the celebration in four years...