Not Quite Sure What to Do? 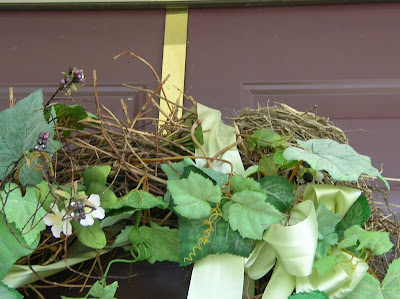 This is a close-up of the summertime wreath I made last year and put again this year. I made some needed repairs when I put it up a few weeks ago but then I started to notice that things that were solidly anchored were starting to dangle, had dropped off or were completely missing. It was the vicious wind we have been having I thought. But, I also had this funky feeling that perhaps one of the birds of the neighborhood might be thieving. My suspicions were confirmed late last week. I went out early for an appointment and was taken aback by more debris than usual following a thunderstorm. I went down the steps and turned around to look at the door and sure enough there was a bird's nest on the wreath. Why I had not noticed before I can't say. But, in the days from when I first became curious to the confirmation some bird has been very busy. In the last day or two of construction a muddy mess also showed up on the door.

The mud has been cleaned off of the door. There are no eggs in the nest. We have not seen the resident. However, there is evidence of nest maintenance each morning. Everything on the wreath is now askew and droopy. It's a nice little nest. Do let stay for a few more weeks or do I take it down?

Oh, I'd leave the nest in place! We have a nest with baby robins on our front porch right now. I love having birds nest on my house.

Leave it up, leave it up! That is so cool. What a great summertime gift!