"Make new friends but keep the old, one is silver and the other gold."

These words from what was for me an old Brownie Scout round ( I am almost certain I have referred to it before in this blog) always come to mind when something special like contact with a special friend happens. This week the refrain has been going through my head almost constantly. First we receive the annual Valentine from our friends Terry and Ray. These valentines are among the most eagerly awaited greetings we receive during the year. This year was no exception. The special cards, always crafted by Terry, are beautiful but I like receiving the news of the family . Yes, I am one who enjoys most of the holiday letters because it is the one time during the year that our circle catches up with each other.

Just a couple of days later we received a "Winter Greetings" letter from old friends Ed and Sharon. The day before my old friend Shelia (that's the correct spelling) called and said she would be driving up our way on Wednesday and wondered if she could see us. She arrived Wednesday afternoon shortly after her arrival I got a phone call from my dear friend Robin. She called to let us know her third grandchild, a girl, was born early in the day. How wonderful is that? 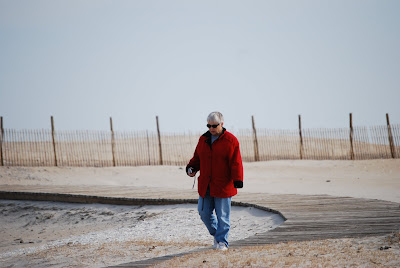 Shelia stayed until this morning. She and her husband Ron are dear college friends from Idaho State. She is a sorority sister. They have lived in North Carolina a long while now and they always seemed so far away. Now we are under a day's drive from each other. Shelia and I headed out yesterday morning for a look/see of the area. But first I needed to make a stop at a wonderful soup kitchen. I will write about this another time. Then we drove through the town of Rehoboth Beach for her to get a flavor of our most famous beach town, then on down the coast to Assateague Island. Yes, I had to go there again. That was OK because Shelia loves the beach and she loves horses. It was so peaceful down there yesterday. Most of the ponies were on a point inaccessible by car and quite possibly by foot. We did see a few ponies and managed to get some great close up pictures of two who were quietly munching away in separate access points. 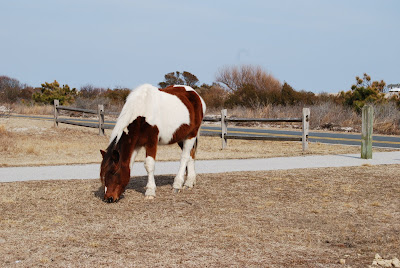 I think I will keep my "golden friends."

Glad the valentine arrived--I was so late with them this year! And I'm glad you enjoy getting them. How wonderful to see a picture of Shelia. It has been so, so many years since I have seen her and I still think of her as that sweet sorority sister of so long ago.