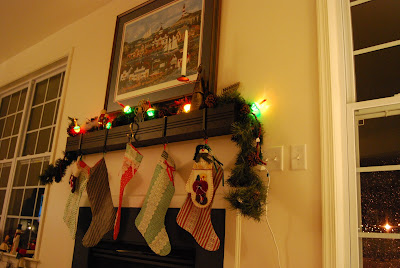 Putting the Christmas decorations up, mailing the cards and wrapping the presents are among my top priorities of the year. Last year our goal was joyously interrupted by the birth on our grandson on December 12. I think it was mid-February before I completely accomplished my tasks. The decorations were up on time but all else was delayed. This year has been more of a challenge after my health scare of late November and early December and Bill's health issues this year. I vowed that I would not complain about them but they played havoc with my Christmas traditions. 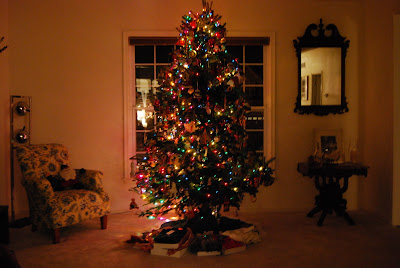 With Erica's help we got our tree the week before Christmas but took several days decorating it. The tree is a Frazier Fir. We have gotten these since we lived in Spokane. Before that it was almost always a Grand Fir or a Noble Fir. The Frazier is a good fir for this climate and is a pretty tree. This year's model is thinner than usual and had a couple of holes that actually added to the beauty. We did not get all of our ornaments on the tree. We did get ornaments from every era of our acquisition of them. The tree turned out quite lovely. 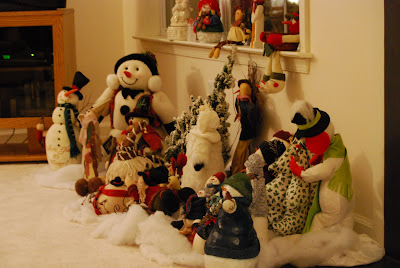 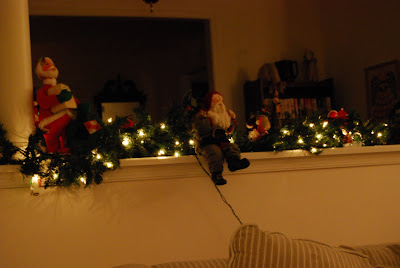 During the days just before Christmas we managed to get most of the rest of our decorations out and up even if not in the originally assigned place. The stockings were hung but the mantel (another story) was not completed with its usual flair. The snowman/woman collections was set out and among the selected areas, it was the most complete. The collection of Santas was put in place and other corners of the house were adorned with lights and/or greenery.

A lack of energy prevented of our more grand décor but the biggest culprit during the week was the huge storm from the previous weekend. It came and left ice and packed snow everywhere. We were out of deicer and so Bill put kitty litter on the sidewalk to make sure I would not fall. A great temporary decision or so it seemed. Clumping kitty litter causes an incredible tracking mess. Christmas Eve day came and we were mopping for the fourth time three days. Finally, most of the tracks are gone. The downpour of Christmas night helped a whole lot too.

Our decorations usually come down on New Years but this year they will stay up through Epiphany. Most of the presents were wrapped an sent. There are still some stragglers and the cards will go out later this week. The good news is that we had a lovely, quiet Christmas and that we were here to enjoy it.

Our best holiday wishes to all.

I think you should celebrate these decorations for at least 3 months -- they are spectacular. Someone was working very hard.

The kitty litter takes me back to our "olden" days, when we lived in Kansas and naturally had that material available. And used it. Once.

It looks beautiful. The tree is really spectacular--looks like it takes up a good bit of the livingroom area! You did well for having just recently returned from the brink. Take care, my dear!