Keep Checking Out the Area

Yesterday we decided to take a drive to Milford and Slaughter Beach. For some reason they seem so far away but they are only 10 miles from here. I think we are getting out of our "Oh, it's just 100 miles down the road" mode. Anyway, we need to learn more about this state that is only 100 miles long and 30 miles wide. We live in the southern most of the three counties. This county, Sussex, and the next one up, Kent, are often referred to as "slower Delaware" as opposed to "lower Delaware." I will have more on this as we learn more of the particulars. According to the 2000 census, Milford's population was 7,201 compared to Milton's 1,791. They have both grown since as is evidenced by the large numbers of new subdivisions in the entire area. Slaughter Beach's population in 2003 was listed at 203.

So, we drove first to Slaughter Beach because it sounded so ominous but is named after some guy whose last name was Slaughter. Maybe, there is some more we can learn about other place names like Murder Kill and Broad Kill. We are also scoping out more of the local beaches. Below is a picture of Bill walking up from a point on Slaughter Beach. 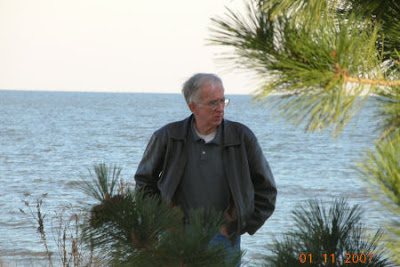 He says that he didn't like this beach as well. It is "shorter" or so he says. But, it is probably because there is not much open sea here. It is part of Delaware Bay.

We just drove around Milford to see what was there. There were a couple fast food restaurants. There is a lack of them in Milton. This is not bad. There were some other stores and businesses that we now know about and will visit as our needs dictate.

The next picture is of some plant life that is abundant here. These grasses grow very high and are protected in order to slow beach erosion. These were alongside the road. There are other grasses but these amaze me because they are so tall and whenever I see them there is either a marsh or a pond not far away. 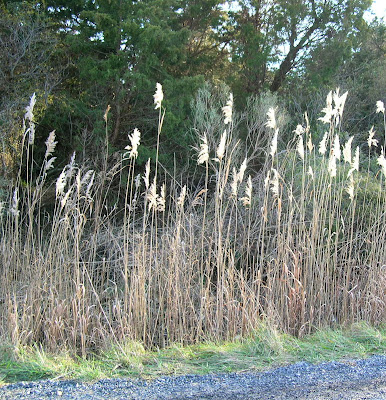 "Kill" is the Dutch word for stream. "Murderkill" means "muddy stream" and "Broadkill" means just that -- a broad stream.