Something Going On in Annapolis

There is a multi-nation meeting (summit) going on today in Annapolis. Middle East peace is again the subject. One can only hope that even a modicum of progress can be achieved. Why, you might ask, am I writing about this event? It is because of an observation the skies here in southern Delaware. Where ever we have lived it was possible to see air traffic -- a mixture of private, commercial and military. In the 12 months we have been here I have not seen a commercial airliner overhead here in Milton. Here we see an occasional crop duster or infrequently a giant military transport and sometimes a helicopter directly overhead. Mostly, if we look to the eastern sky we can see the contrails of military airplanes making their way up and down the eastern seaboard or out over the Atlantic to foreign landings. The day the "Surge" started in Iraq there seemed to be dozens of planes flying out and back in that eastern sky leaving line after line of parallel contrails. We are very close to that security no fly zone they speak so often of.

Today, it was different. There were many contrails overhead and evidence of planes heading in a westerly direction. My guess, securing the airspace over and around Annapolis. Annapolis is only 80 roads miles away so it only makes sense that we can see evidence of the security just by looking up here. This photo was taken from the steps outside our sun room and directly overhead. 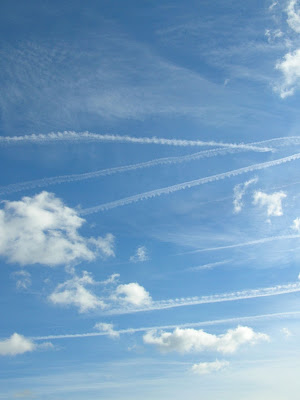 I really like this picture - an indirect way of ascertaining what is going on miles away.