It has been raining almost constantly for several hours now. At least the wind is not blowing now and the rain is very much needed. 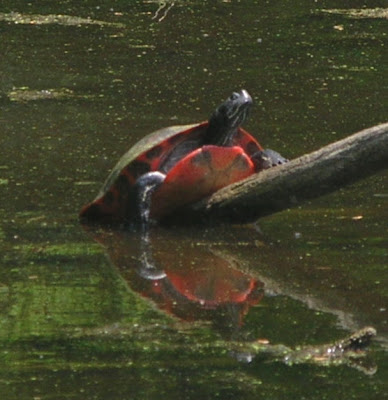 When we moved to Delaware I was taken aback by signs near ponds and lakes that say "Turtle Crossing." Never in my life had seen such a thing let alone a turtle crossing the road except for the giant tortoise that stopped traffic in Orlando when we were there many years ago. Last summer I saw some turtles on snags in one of the coves of the nearby pond but they were quite far away. This year has been different. We have seen turtles on the roadside and actually diving in the ponds. The other day when I got my latest photos of the local heron, I was amused by the turtles near the pond's shore. I call this shot "Mr. Tur-tell." It brightens the rather dark and wet day.

What a great shot! Katrina still talks about the turtles on the log...

Hope you had a great Mother's Day!