Smart Idea or Not?

Yesterday, I had an appointment in Salisbury, Maryland. It is an interesting drive through the countryside and the fringes of some of the towns along the way. Throughout the summer and fall there is farm stand every few miles. This time of year there is an abundance of winter squash and gourds, tons of pumpkins and pot after pot of mums. I am always tempted to stop and get more than I can possibly use. It was my intention to stop at a farm/nursery place yesterday but the appointment went longer than anticipated. So, I came home empty handed. But, I did come across something that was a puzzlement.

I turned onto the "major" street before the street where I was going and found this interesting layout. First glance was that it was rather attractive, the curved outcroppings alternating perfectly from one side of the street to the other (see the marked in pink on either side). The freshly painted double yellow line matched the curve of curbing perfectly (middle pink marking). This configuration goes on for little more than three blocks. These pictures were taken on my way back. Since traffic was an issue and there was no place to pull over I was not able to capture the full impact of the configuration. It is like a flat and short contrived Lombard Street in San Francisco. 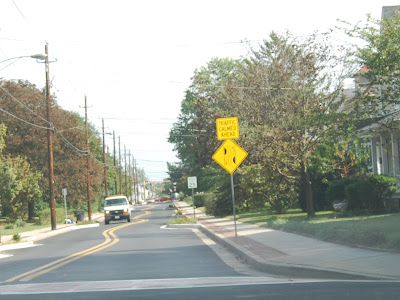 The first picture was taken at the start of the configuration and has a four-way stop warning. The next picture is of the warning sign that further announces the configuration. "Traffic Calmed" my eye! Note, the speed limit is 25 which is excessive unless you can drive straight down the street. No, the camera is not distorting the waves. 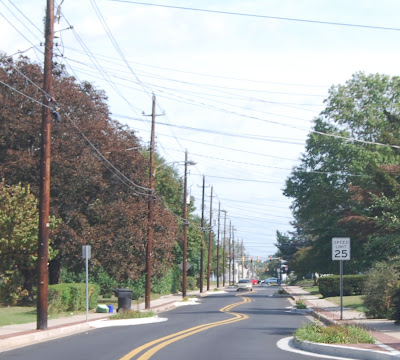 Here is a better picture of the street. It is an older neighborhood bordering on commercial areas. You can see that some trees are starting to show fall color but mostly you notice the road itself. I sure hope someone doesn't try to plant trees in those areas. That wavy line is for real and it is a pain to drive. I got a little dizzy weaving from one side to the next. 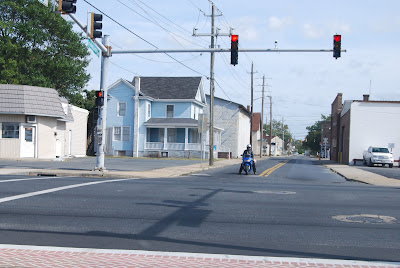 And, here we are at the end of the "Traffic Calmed" area and back to regular traffic hassles. 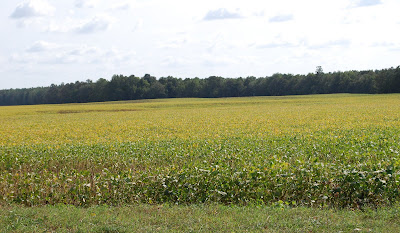 The short trip also provided some glimpses of what is happening in the local fields. The above image is of soybeans as they near harvest time. 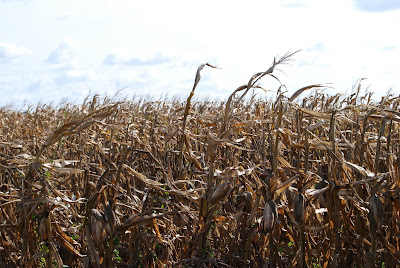 Many of the corn fields are being plowed down. Here is one with the dry stalks standing in the wind. They look cold and foretell of the coming season.

That "calmed" traffic looks a little agitated to me! That is a crazy idea in my opinion.

This cracked me up. I think I'll stick to Portland's traffic calmers! June