Summer is Winding Down

It is still officially summer and that is what it feels like outside. It isn't that it is so warm (high 80's), it's that it is just soupy. I truly do not care this. So, I am really looking forward to the autumn. I can honestly say that I miss cool nights and mornings. With all of that aside, however, it has been a pretty reasonable summer. Sure, we have had some very warm days but we have also had very pleasant days as well. There were fewer of those mornings with heavy, steamy fog than last year. For that we are grateful. We haven't been out and about as much this summer as last but we have enjoyed the concerts in the park and being involved with some of the Milton Lions Club activities. This picture is of several of the members at the end of a busy day on August 23. Running the Milton Clipper Express is a favorite activity. That day the club also sold funnel cakes and had a car raffle table set up in the park for one of the annual town activities, Bargains on the Broadkill. 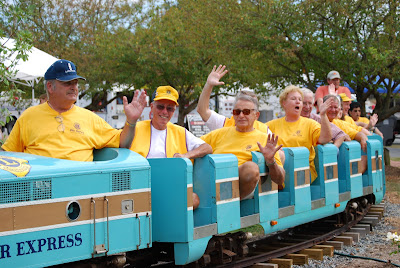 There will be two more concerts and then we put the train away until May. I love projects like this because of the camaraderie of the members and most of all for the joy that they bring to young and old. The Carousel in Missoula, MT was also such a project.

Update: On a sadder note, our lovely nest of three beautiful blue eggs was abandoned. I am pretty sure that they are robin eggs and it was about the time of that post when I last saw any robins in our vicinity. The nest and the eggs appeared very late in the season. There would not have been much time for little ones to mature.