Good Day Despite the News 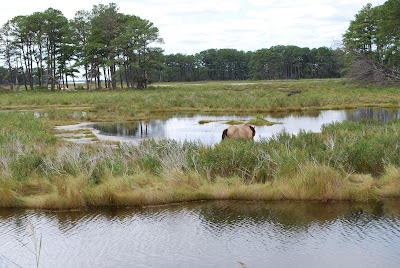 We were fortunate to have our good friends Robin and Dave to visit for a couple of days. Yesterday we drove down to Assateague Island to see the wild ponies and the seashore. This trip we first drove to Chincoteague which is on the Virginia side of the island. We saw this lone pony in a marsh alongside the road. There were other ponies but they were mostly in the trees and very hard to see. This pony seems to be enjoying some down time now that the summer population has gone home and there are just a few campers and visitors. 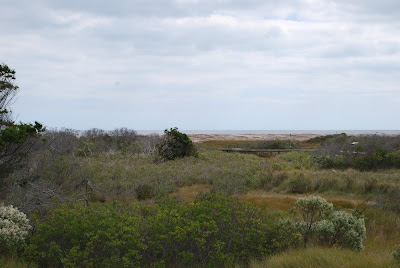 In this picture you can see the Atlantic from the Visitors' Center. The sky looks a little ominous here but that is how it has been for a few days now. Perhaps a reflections of the grim news in the financial world. 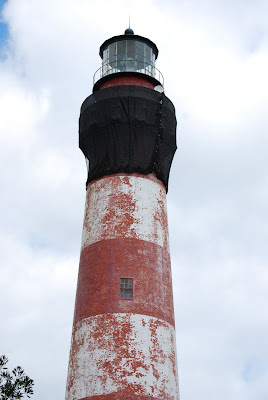 It was then onto a brief visit of the Assateague Island Light House. It was commission by Congress in 1855. It is going through some much needed renovation. When I near one of these old sentinels my mind sets to wondering about the days when these beacons were manned. There had to be some amazing stories. We went from here back into the town of Chincoteague and had a late lunch at a place call Bill's. We all thought that appropriate.

Then it was time to go and see if we could find some ponies on the Maryland side of the island. That trip is over 20 miles because there is no through access on the island. When we were last here there were lots of folks taking in the nature trails and just walking the beach. This time there were few in trails area, more on bicycles and lots of campers in the designated areas along the beach. It was getting on in the afternoon and we had still not clearly seen a group of ponies. We drove clear around the National Park Area and missed the trail area we spied ponies in during our last visit. Mind you, we saw lots of evidence ponies had left behind but still not seen a group of real live horses. We drove through the park and back around and with the gracious assistance of the ranger at the entry station we got to trail the we had sought. We parked the car and started out on the trail down to the marsh. We dodged evidence all the way but it was worth it because some of the ponies were right next to the wooden walk. 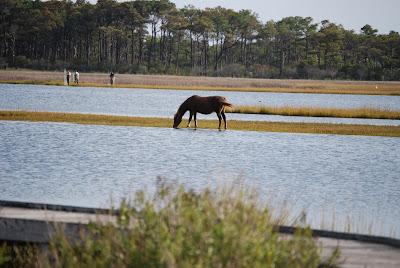 I had the longer lens on the camera by this time so the horse in this picture looks closer than it was. The three guys on the opposite side of the water were trying to net something. 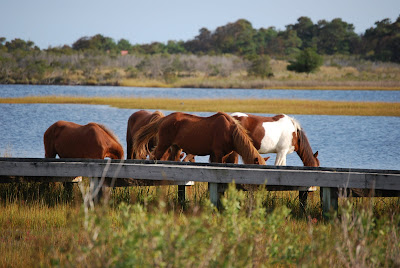 You can see in this picture how close these ponies were to the boardwalk. I think there were three more horses in the group that are not in this picture. 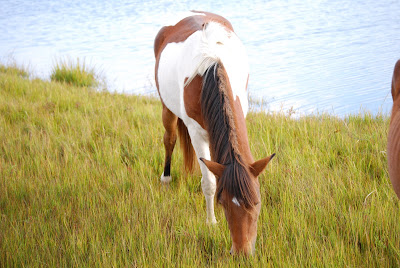 While on our last trip to Assateague, Bill's grand-niece Rebecca adopted a pony named Rosie. It is a pinto and looks much like this one. I need to research this a little and see if this might be Rosie. The next couple of pictures are some close-ups that could not have been taken if I had not been so close to the ponies. We were close enough to touch them which is illegal to do. It was awesome to be that close. 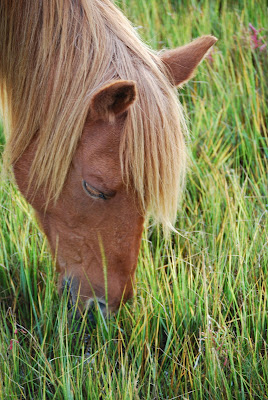 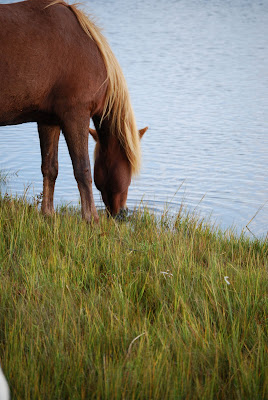 It was very enjoyable making this trip down the coast and sharing it with such good friends. 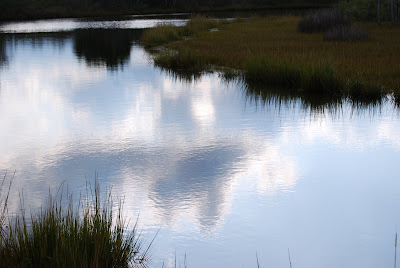 The marsh as the sun is taking its position in the late afternoon sky.

It's always a delight to have these travelogues at the other side of the States -- places I sort of remember, in a dreamy kind of way -- probably never was there, but read and thought about it. Thanks. June