The past few days and weeks have held some pretty grim news on the economy and then with natural disasters. I think it is about time to share some items of good news.

My brother Jack and sister-in-law Linda evacuated their home for the second time in three years last week. They live in Lake Jackson, Texas and the area was to receive the full force of Hurricane Ike. They returned home Monday to find minor damage to their house. They spent that afternoon and yesterday cleaning debris from their property and helping their neighbors do the same. They had purchased a generator earlier in the month and set it to run while they were away. When they returned home, the items in their freezer were still frozen and the items in the freezer compartment of the refrigerator were starting to thaw. So, they cooked it all up and shared with the neighbors. As Jack said, "We were blessed."

I received an email yesterday from one of my dear friends in Spokane. She was emailing with an article she knew I would be very interested in reading. It was about another friend receiving a prestigious award. My old friend Gary received the NIH Senior Scientist Award (article is linked here). WOW! How cool is that? This guy is the spouse of one of my sorority sisters. He was named the sorority sweetheart when were all at Idaho State University. Actually, Gary was kind of a sorority brother. He was and remains one of the smartest people I have ever met. He also has always been one of the hardest working, least pretentious and devoted people I have ever met. And, he is one of the funniest, no probably the funniest person I have ever met.

In the world of higher education there is all too often an elitism that curdles my stomach. What a breath of fresh air Gary brings with his dedication to his research, his researchers, his friends and his family. To him it is not the initials after the name that are important. It is that progress can be made. And, this he has done.

From Virginia and Delaware 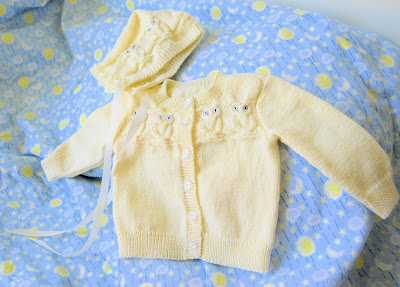 This is a picture of a just completed project I have been working on for most of the summer. This tiny little sweater and cap are for our first grandchild who is scheduled to arrive the first week of December. Now that I have finished knitting the sweater set, I think I will move on to making some swaddling blankets. They will not take as long and will fit for a longer time.

Erica and Geoff have started putting together many of the required items now that they have settled in their first house. They are both very happy becoming parents and have opted to have the gender be a surprise. Of course, Bill and I are elated and try to be cool about it.

We saw Priscilla last weekend while we were in Pocatello and she just 'happened' to have a copy of the article about Gary in her purse! She's so proud--and so are we. Her first great-grandchild was born last week in Portland, so she was a happy lady!
The sweater is beautiful. Are those little cabled owls? So sweet. And so exciting! I hope Erica is feeling well. Quit trying to be cool--might as well go with the feeling and gush!