Jack Is How Old? 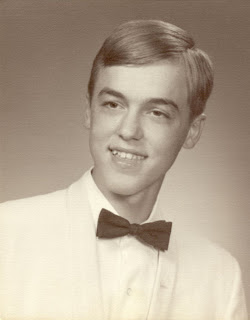 Today is my brother's birthday. He is, shall we say, moving right along in his 50's. Jack was born Russell Lewis but I kept telling my parents that we would name the baby Jackie whether it was a girl or a boy. Well, Jackie he was and Jack he became.

Jack was always a tiny, wiry and almost always in trouble little guy. He would blame it on his sisters but I swear there was nothing quite like him. I searched through some old items left at our mother's for some of the priceless pictures of him in just his underwear and cowboy boots (that was his favorite attire) but it seems that he had cleaned them out. Keeping an eye on Jack was Mom's primary activity on any given day as he was growing. You could find him just about anywhere (always in cowboy boots and most often sans clothes) -- in a neighbors chicken coop, pushing a doll buggy down the road, climbing the city water tower, hiding under the church steeps or fishing in the deepest of mud puddles. He introduced himself to a Sunday school teacher as "Roy Rogers."

He was never bad as in delinquent. He was full of energy and full of mischief. He loved to tease us and he still does. When they were little, he and our youngest sister Connie, would have nightly wrestling matches and "Jon and Con" would then ride the arms of the couch as their make believe horse. These activities seemed to go on for years.

Once after we were all grown and had moved onto our separate lives Mom told me that she missed we three girls very much when we left but she thought she would go crazy when Jack left. You see he had filled every waking minute with his noise and activity. You could always tell when he was trouble by the absence of noise.

I always thought that our dad was the world's craziest person about grandchildren. That is, until Jack became a grandfather. He is absolutely nuts. He has three beautiful grandchildren, Rusty, Gavin and Caralynn. If you don't believe they are beautiful, just ask him.

Jack is still a tease but he is also one of the hardest working people you could ever meet. He is loyal, proud, loving and caring. He is dedicated husband to his wife Linda. He is a loving father to Stacy and Josh. Oh, and did I say, proud grandfather.

He is my crazy bother and I love him. HAPPY BIRTHDAY, JACK!!