The Today Show is doing a series that is featuring 10 of the most beautiful places in America. The series is appropriately called "America the Beautiful." So far it has featured Niagara Falls, Charleston, SC, Arlington National Cemetery and today the spotlight was on baseball parks. I have found the selections interesting and I have to say that I cannot disagree with them so far. On the website they asked viewers to share their pictures and I submitted a couple. One of them is featured. I took that picture (bottom right of page 3)when we visited the Washington, DC to see the cherry blossoms.

When the segment for today's feature aired I was reminded of special day Bill and I spent late last August in Seattle. We had never been to a Mariners game, let alone any major league baseball game. It was a very enjoyable evening. Looking again at the pictures from that night I related to the segment on the Today Show. There is something magical about going to the baseball park and watching the game, win or lose. You do not have to be a real fan of the game to enjoy the experience. In many way it is simply a night or afternoon out to share a few hours with those around you. We'll do this again but probably in Baltimore or Philadelphia.

This is a collage of some the pictures I took that night. Safeco Field is unique in design for it has a retractable roof. Rain was threatening the night we were there and so we were able to see the roof go through its maneuvers. Fortunately, as the game started the clouds parted and were watched the game in open air. 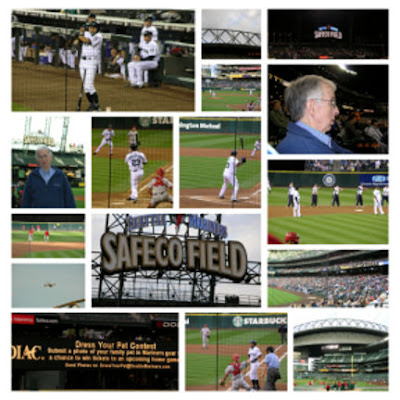 Congrats! How cool that your picture was chosen. As for baseball parks, I hope that you guys will join us for an Orioles game. Its not the same as it was when I was a kid at Memorial Stadium, but its not too bad!