Something I Have Always Wanted to See 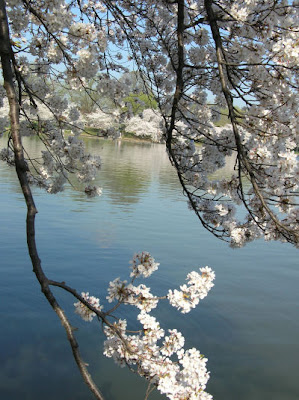 We were up early this morning; 4:00 a.m. to be exact. All this for an outing to Washington to see the "Cherry Blossoms." Our plans had been to go over later in the week but I have been keeping check on their peak and because of some warm days last week, yesterday was the day. So, we decided that we would go today in order to see them before they started to fade and drop. For all who know me, you know how I am NOT a morning person especially this early in the morning. But, I have to say that the trip was worth the effort.

We had carefully considered the way we would get to the Tidal Basin area. We would try to get a parking spot at the Jefferson Memorial. Of course, I took a turn too early but all was well and I almost took another wrong turn once I viewed the Tidal Basin awash in the beautiful blossoms. We arrived at the Jefferson Memorial not much after 8:00 a.m. The timing was probably perfect because I drove right to a parking place in front of the monument. We took our time and went to the monument which I had never visited. Jefferson was such a brilliant man and I found the monument beautiful.

From the steps of the portico we looked out and could view the whole basin and the hundreds of cherry trees. We walked part way around the Tidal Basin. We were greeted by students in groups, mothers with strollers, visitors of all sorts, runners, folks on bikes, National Park Service Rangers. It was a good morning and the large crowds had not yet arrived.

I took over 150 pictures today. It seems like everyone else was doing the same and all with the same pleasant smile on their faces. I will post more pictures tomorrow.

We left Washington not long after 11 a.m. and drove to Annapolis for lunch. From there it was home where we both have been a little slow since arriving here late this afternoon. 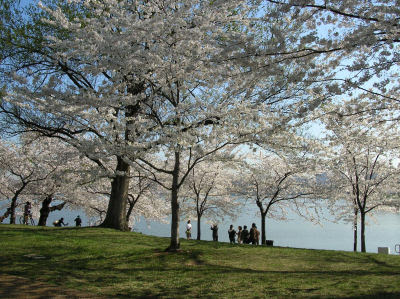 How lovely! Next year (so many things are on my list already!). :)