Out and About Around Milton

Most of the past week the weather was downright miserable. The heat index was exceeding 100 degrees daily. Wednesday morning all of our windows were fogged over almost reminiscent of winter except with the reverse reason. Even with all of the humidity which we are reminded has not been bad this summer, the area is experiencing drought conditions. Saturday we drove to Seaford and saw field after field of brown, dead corn. I don't know the extent of the loss but a emergency was declared earlier in the month for neighboring Maryland.

I was out early last week to run several errands including having Bentley groomed. Here are a few pictures of more sites. The first is of a dragon fly who was too hot to get off of the sidewalk that runs from our steps to the driveway. 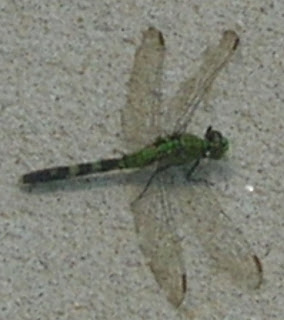 On the way to the other side of town and Hwy 1 we cross Wagamons Pond as it dumps into the Broadkill. At either side of the bridge is a warning sign I had never seen before coming to Delaware. 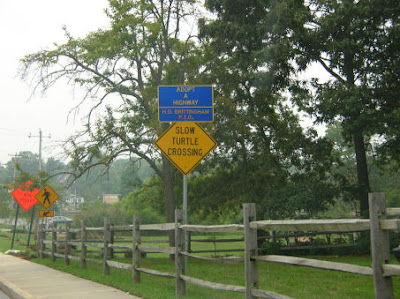 I have to admit that I keep looking but have never seen a turtle crossing the road. I have seen some in the pond and a few weeks ago I saw one alongside the road. I guess I will just keep watching.

When you see this next sign you will know why it is one of my son-in-law's favorites. This is a little lane just outside of town. You might have noticed how hazy it is in these pictures. That is pretty much what it looked like early last week -- looked cool out but was very, very warm.

I wonder if Christopher Robin lives at the end of the lane.

Starting around 3-3.5 weeks ago we started seeing these beautiful bushes blooming. Some of the bushes were completely laden with blossoms. The bushes ranged in color from white, to light pink, to deep rose, to lavender. I kept think that they looked like lilacs but knew better since we were in the middle of summer. Also, I do not remember ever seeing such bushes before now. I finally learned last week that they are known as crapemyrtle. 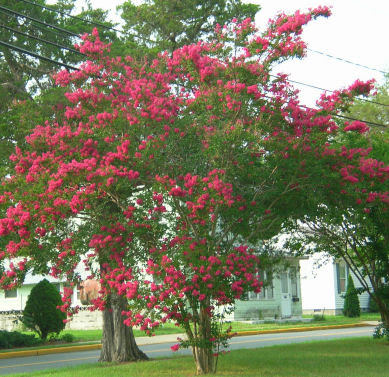 This is not a real good example of how lovely these plants are but once I finally found out what they were and remembered to have my camera, they were on the lasts days of their blooms. The color here is the most common I have seen around here.

A day out and about here is not complete without passing at least one or two farm fields. I have shown pictures of corn and wheat and barley. Now here are some pictures of beans. I have to admit that I am not sure whether they are soybeans or lima beans. They have to be one or the other. The interesting thing for me is that the fields are turned from one crop to another very rapidly. These bean fields were wheat or barley fields just a few weeks ago. We passed a field on Saturday that had been corn, has been cleared and there are small new plants already growing. 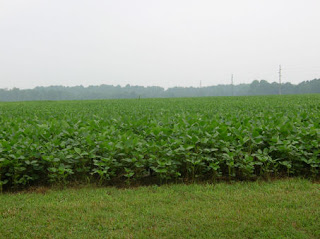 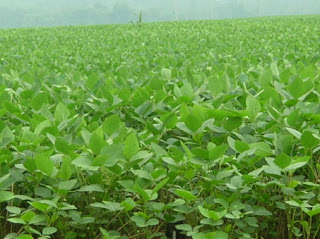 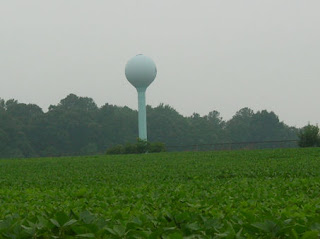 I LOVE the pooh and tigger sign and I'm impressed that you got a shot of the dragonfly. I have yet to get a good close up!