My mother has been the focus of many posts. She passed away two years ago this month. Not a day goes by that I do not think about her and my dad. Sometimes as I remember them I just ache because I miss them so. There are the times I am filled with joy because they are always with me. And, then there are the times I just shake my head in wonderment. Take the day in September when I went to Dover to purchase flannel for receiving blankets for our soon to be grandchild. I wanted to make sure that Erica and Geoff had some of these over sized, double thickness blankets. My mother made each of my siblings and me several of these when our children were born. They were especially useful as the baby got bigger. Erica used her for her dolls, her pets and covered herself when she took naps. We still have a couple of those originals around here.

I waited to start this project because Erica was hesitant about whether or not she wanted them until one of her friends told her she need LOTS of swaddling blankets. I had originally thought I would purchase fabric on-line until I realized that shipping costs would make the whole process unreasonable. So it was off to a fabric store. Dover is 30 or so miles away and is the closest area for a fabric store. While there I found several really cute boy possibilities and some very sweet girl possibilities. The problem I was having making my selection was that we do not know the gender so I had to select viable gender neutral pieces. I found several that I liked and selected them making sure that I had a complimentary piece for the other side. This is where my mother comes into the story. My mother was a very good seamstress. My mother had a taste for outrageous fabric. The louder or busier the better as far as she was concerned. While I selecting fabrics I was in a section where there were several pieces of the same color palette and I was trying to pair two or three pieces. Anyway, I made my selections and came home.

When I got home I eagerly showed them to Bill. The problem was that I could not effectively match the fabrics as I remembered them when I purchased them. In fact, I got home with at least one piece I do not remember selecting. There was one piece that was of the color palette of a couple other pieces but it just did not match. I tried several different combinations and after a few days decided that I needed to match that piece and another with other fabric. This trip was to Salisbury where I found a few more pieces I liked and a solid to match my strange piece still at home. It was while I was selecting new matching fabrics that it dawned on me what happened earlier. My mother had selected that fabric and put it into my cart. I remember selecting another but do not remember it getting into the cart.

Well, after all of that I ended up having to get a new sewing machine (my old one just pooped) and finally finishing 10 large receiving/swaddling blankets. A couple of them are very sweet, one is very wintery with snowmen one side and snowy trees on the other, a couple feature many of the animals that seem to be making up the theme of the nursery as it progresses, one has a nursery rhyme theme, some have fun patterns, and then there is one that Erica proclaimed, "Oh, my gosh, that looks just like what Grandma would have done!" 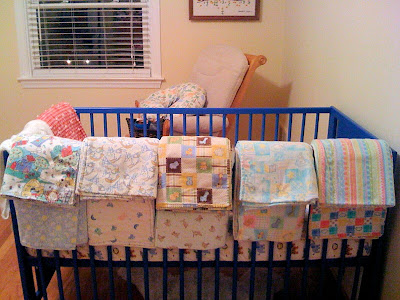 This photo taken by Erica using her i Phone shows all of the blankets over the edge of their bright blue crib. If you look closely to the right you will see the channeled blanket. It is not the prettiest by far but it will be used with lots of love and remembering. Mom will be in the nursery looking over another of her great grandchildren.

Oh, sniff, sniff. I know how much you miss your Mom-- I find it sad that my Mom never knew her great grandchild, as I'm sure you are feeling. But there are those moments when it does seem possible that they are present in some way. I only made two of the flannel blankets for Sofia, but both are used constantly. In fact she is napping under one them in my family room right now. Of the two I made, she is partial to the "wild" lime green one with the frogs all over it.

What beautiful blankets. I'm sure your mom must be so proud of you right now.

I love these kinds of projects -- they just allow you to play. And the result will be warm and cozy and smell like baby -- what could be better than that?