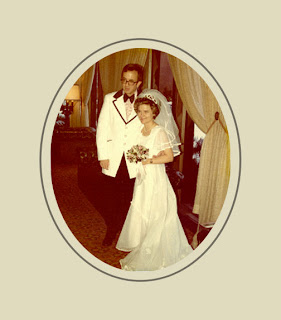 Today is our 31st wedding anniversary. From the picture you can see that Bill had a lot less gray hair and I had a lot less of me. It was, however, a fine wedding held at the Cathedral of the Rockies in Boise, Idaho. There was much fun and frivolity on that day.

The day itself was very gray and dark because Boise was shrouded in an inversion layer and had been for sometime. It was so foggy that there were some who could not find their way to a post reception party. Bill and I were fortunate enough to get out of Boise the next morning for our honeymoon as a priority case. They were seeding clouds to break the fog and very few airplanes were able to take off then. We got out and had a wonderful 10 days in California and then Reno and Lake Tahoe.

These 31 years have seen us several places and this year it is in Delaware. Instead of going out for an anniversary dinner tonight we went out instead for an anniversary lunch to a place that has become our favorite in Lewes. We'll plan for a more dramatic celebration next year.

Thirty one years sometimes seems like an eternity but mostly it seems like it was just yesterday. The only problem is that we have gotten older, older together. There is something nice about that.

Happy anniversary! You two are a great couple and, yes, isn't it nice getting older together with someone? Aren't we lucky to have long, successful marriages?

And p.s.--thanks for your message and words of wisdom earlier. You are a good friend.

HAPPY ANNIVERSARY! John and I hope to have such a long journey with each other as you two have shared. Many happy returns of the day!