Awe, the trip to Cape Cod!! A special one it was. For you see, it was the time that Robin and I had agreed to do something special in honor of having turned 60 or thereabout. We got our ears pierced. Yes, it was the first time for each of us. Now you might wonder why someone would wait for so long to have this done. I am not sure why Robin had not had it done but I know why I have not had it done before now.

The story is not long but it one wrapped in a memory of "Yuck!" Around 40 years ago I was one of the observers when my sorority sister Sandy pierced my other sorority sister Terry's ears. That was in the days of ice, cork and thick needles. I don't remember Terry screaming or anything like that. I just remember being totally grossed out and deciding then and there that that was not something I would choose to do. It was further exaggerated when Terry developed allergies to the alloys in many of the earrings available. Her ears looked like they were going to fall off her head. But, she stuck with the program especially after her Dad got her some stainless steel posts and she still wears earrings.

Robin and I went to our appointment on Thursday and I have to admit that I almost backed out of the deal. So, I went first and yes it did hurt probably because I imagined it so. Robin was much braver. After a few weeks we will be able to wear the earrings we have gotten as gifts for our birthdays.

Here are pictures to prove that we got the job done. 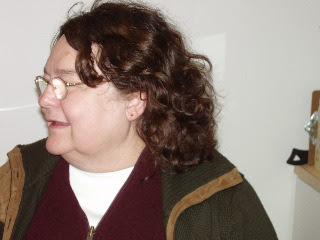 See, there on my left ear lobe!! 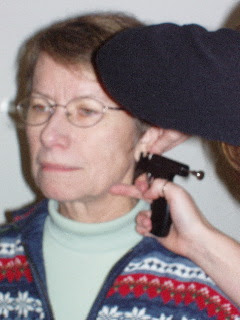 It was only recently that I realized how traumatized you were by my ear-piercing! I am glad to know that, thus far, you have survived the ordeal and are in for a lifetime of *good* gifts! Despite the amateur status of my piercer, Sandy actually did quite a good job. They are very even and nicely placed. Pierced ears are faaaaabulous! Congratulations.