Here's a second attempt for this post. Seems as though I tried to out think the browser and kicked myself off and in doing so lost what I tried to post yesterday. So, here goes another attempt at "whatever."

It continues to be cold here. It was 13 degrees the last time I checked. It is not as cold as it is in Minnesota and other places but it COLD nonetheless. I still have a hard time looking out at the sunshiny day and thinking it is about 50 out there -- NOT. So, what has been going on to keep warm? Not much, pot roasts, filing, laundry, stuff like that. Oh, we have taken a couple of drives in our efforts to become more familiar with the area. This past week our ventures were to Dover and back to the beach.

Depending on which roads are taken, Dover is between 30-40 miles from here. Yahoo maps it at 31.1 miles. I have hesitated going to Dover because of a pain I get in the gut when I think of those planes that land at Dover AFB carrying the caskets of fallen military. I don't think I can or should ever get over that but we still needed to see some of Dover. We passed the Air Force Base and saw several planes that were landing and some that had just taken off. Then we went into the government section of the city where the state capital building is located. What I found particularly interesting was how small the State Capital Building seems in comparison to the Idaho State House for example. The Delaware building itself is actually younger than the Idaho building but it was built to reflect the strong colonial roots of the state. I have to keep remembering that Delaware was the "First State" and Idaho was the 43rd state. We arrived in Dover in the early afternoon and decided that we needed to come back during the morning so that we can spend some time in the museums and archives.

Sunday found us back on our search for the illusive perfect beach for us. First we went to our favorite spot at Cape Henlopen State Park and then decided because of the cold and wind not to make the journey down to the beach. We then drove a short distance to the "point" where we previously found the beach to be beautiful but the access for me was very difficult. This time we decided to check out another of the access points and found it much more accessible but the last part of the path is quite steep. We did not let this stop us from enjoying the view from the top of the trail. I am always amazed at the moment when I realize that if I just turn a little there is a whole different view of the world. This was very much the case on Sunday. Here are some of those views (all taken from spots within 10 feet of each other). 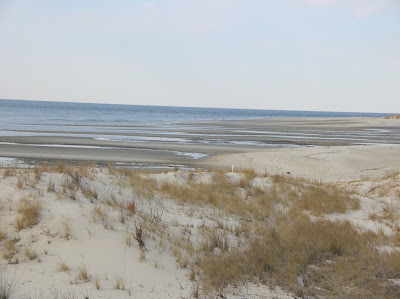 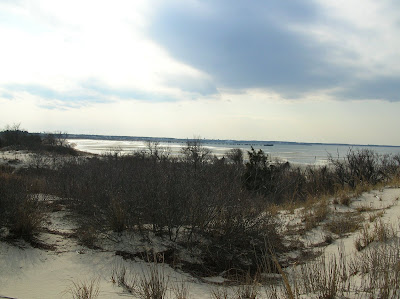 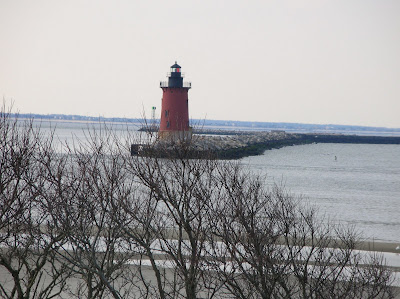 This is the Delaware Breakwater Light. In an earlier post I mistakenly referred to it as the Lewes Light. This picture and the previous one were taken looking slightly to the left from the access point. 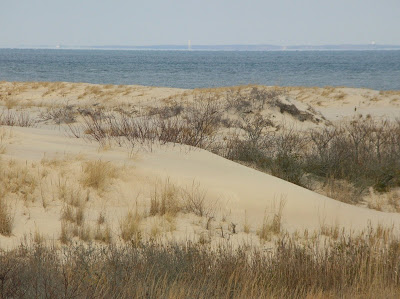 Now looking right we can New Jersey in the distance. 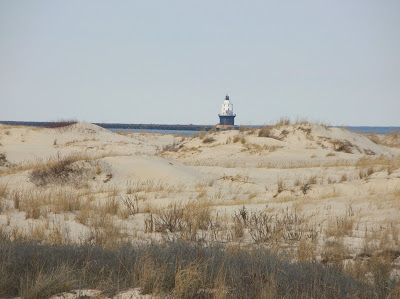 Still looking right is the Harbor of Refuge Light. I know that I previously identified this as the Cape Henlopen Light which was replaced with the Harbor of Refuge. Please check out the link to the Lights. There will be more posts on these lights as time passes because I find that they are harboring tales that intrigue me more and more. 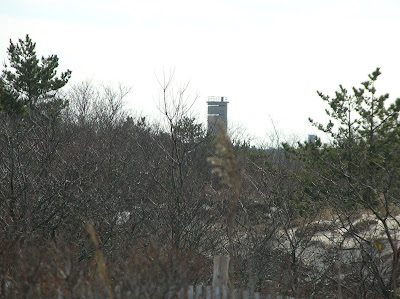 As I turned back around to the left I got this shot of World War II Towers erected for observation and protection of the Delaware coastline during World War II. There are several of these towers from Cape Henlopen south to the Maryland border. 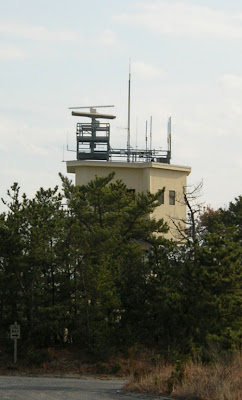 What fun pics! Glad that you are having fun exploring. Stay warm - it is frigid up here too (-15 wind chill!).