Another Day, Another Deployment 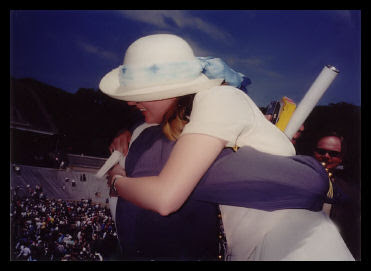 This never ending war is always on my mind. My niece's husband has been deployed three times to the area -- once to Afghanistan and twice to Iraq. My nephew has been deployed to Iraq (Kuwait) and is scheduled to go again in the late summer. And, today, my friend's son deployed. All of these men chose the US Army as a career. But the career and personal development part keeps being shelved for deployment to the Middle East. I love and respect these guys so much. It is that I simply despise this stupid war.

When I think of these men it is of younger beings. My nephew was a cute white haired little guy who hated shopping so much that he would get downright belligerent about it. Outside of that, Max was a kind and gentle little boy who grew into a wonderful man. He joined the Army right out of high school and is nearing the 20 year mark. He has seen duty several times to Kuwait and the Gulf War area, Iraq, Korea and Germany. Max and his wife are the proud parents of three adopted children. They have two boys and just adopted a baby girl.

I did not know Jon, my niece's husband, when he was a boy. I just know that his wife and family are very proud of him and his commitment. They have two beautiful children -- a girl and a boy.

Now, our friends' son, is another story. He and my daughter are the same age and they have been mostly fast friends since they were six years old. My fondest memory of them was one afternoon I looked out the living room window and there they were sitting on a limb of tree discussing in their seven year old way the world and world affairs. That was the way they were and continued to be as they grew up. Perhaps one of the happiest days for all of us was the day Nate graduated from West Point. Erica graduated from Johns Hopkins two days earlier. They savored their joy that is evident it the picture at the intro to this post. They were ready to meet the world.

Nate deployed today. His wife and young son await his return. Their second child is due this summer. Our thoughts and prayers are with them always and with all of those who are serving. Be safe and God's speed.

Carla,
Thank you for this. I am not listening to the news as much and tears come easily. We do remember that sparkling day at WP and the joy of having our "family" share it with us. R&D