A Few Hours In Washington, D.C.

It was time to take Frankie back home and so yesterday Bill and loaded up Frankie and Bentley and went to Arlington where we left the dogs while we spent a few hours in the District going to the World War II Monument and to the Roosevelt Memorial. It was a beautiful day albeit cold and very windy. That did not detract from the beauty and significance of these two sights. Besides, it is always inspiring to see the Washington, Lincoln and Jefferson monuments.

When I first started this blog it was in part to help me compile thoughts I had of my mother. She has been gone for a few months now but I am constantly reminded of her and my dad when I see old pictures or think about things I am doing and wonder what they might think. They grew up in the Depression and World War II marked the onset of their adulthood. Those two eras defined the strength of that generation, That strength is evident in both of the monuments we visited yesterday.

Dad enlisted in the Marine Corps the day after Pearl Harbor. He served in the South Pacific -- Guadacanal, Iwo Jima, etc. Because of this I was more drawn to the Pacific side of the World War II Monument. Each state is represented and each front is represented in this memorial. There is much to take in and one visit in the cold is not sufficient. We will go back when it is warmer and the water fountains are turned on so that we can see the full beauty of the space. 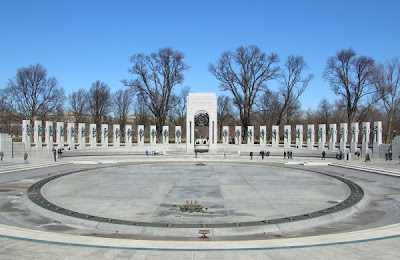 Nearby is another memorial we have not visited. I had wanted to visit the Franklin Delano Roosevelt Memorial for sometime but have always found something else to do. Besides, I was 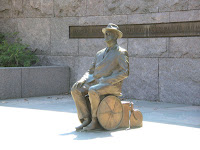 not expecting much. There was so much made of the statue of him in wheel chair that I thought for some reason that was all there is of the monument. How wrong, I was. First, the statue is pretty small. Second, this is a massive but unobtrusive work. It is inspiring and very symbolic. It is divided into rooms each representing one of his four terms in office. The first focuses on the emptiness of the Depression, the second on need for hope and the New Deal, the third on the War and the fourth on Warm Springs. 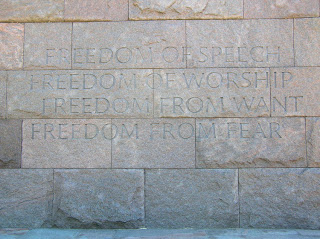 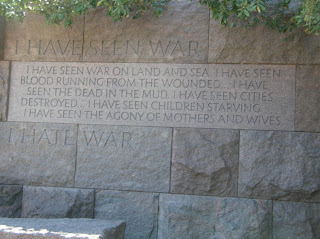 My Dad never said much about Roosevelt. He always liked Harry Truman. But, my Mom really hung on his words. She is the one who always told us about listening to him on the radio and how sad it was when he died.

I have never been much of a Roosevelt buff. After visiting the memorial I think I shall study his

words and works more closely. His leadership probably shaped my beliefs more than I have previously thought. Whether it is his "Four Freedoms" or words to encourage a depressed nation I think that I need to learn much more about this man. 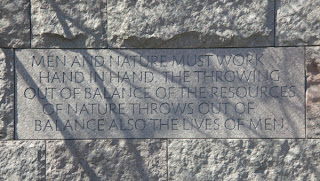 I have yet to go to either memorial - maybe once we move back. And cool video below! You are becoming quite the blogger!