Yesterday was a beautiful day. The sky was clear, the wind was hardly blowing and although it was still chilly there was enough warmth from the sun that we needed to run the A/C in the car. We have been taking care of Frankie and Erica and Geoff got home from their vacation yesterday. So, we decided to drive Frankie home ourselves. It was a lovely day and it had been several weeks since we had ventured very far. It was so good to see leaves appearing on the trees, blossoms starting to reveal themselves and lovely daffodils all along the roadside.

Frankie was one excited dog to get home. Bentley, who loves to visit Erica, was also excited to be there. Erica fixed us a quiet dinner and we were on our way back to Delaware.

I took my camera out and starting taking pictures as we proceeded home. I am still (probably will be for a long time) learning how to use my new camera but it was fun just pushing the button. I will post more of the photos later. Here are a couple of Bentley I took by just pointing the camera to the back. I had no idea if he was in focus or not. 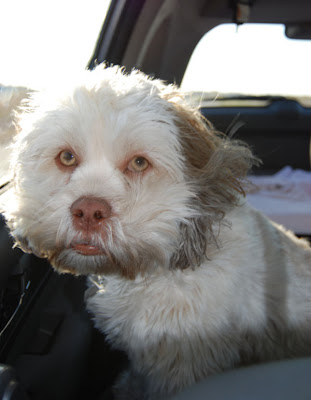 The front window was open a bit bit for him to have more air so his hair looks slicked back. He was quite put off by the fact that he was not allowed to ride up front with us. 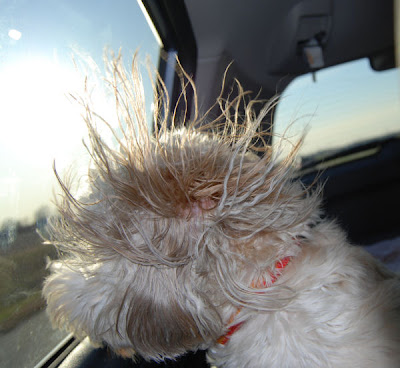 Here, he has turned his head to watch out the window. He is looking at the Chesapeake Bay as we cross on the Bay Bridge.

What a great windy picture of Bentley!