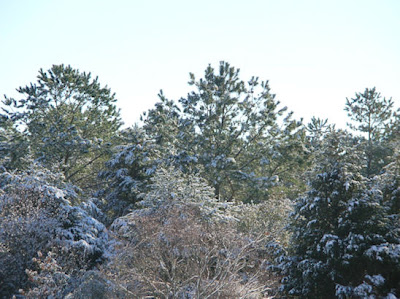 Yesterday it snowed here. Not very much at all but enough to cancel the Christmas parade. I can honestly say that I really wanted to go to it. Besides that, there was a run on milk, bread and other necessities at the grocery store. I was amazed because there was so very little snow and it was so much nicer outside yesterday and last night than it had been the previous two days when the wind blew hard and constantly. Things around here pretty much button-up with just a little snow. The schools all had a early release, classes and events canceled. It was hard for us to understand because it seemed liked nothing. But, I understand the concern about icing and the lack of equipment for that type of condition. The Goshen UM Chicken and Dumpling did go on and we went and then enjoyed the lights in downtown Milton.

The above picture was taken earlier today when I stepped out the back to take a couple of photos. I was rudely interrupted by a naughty dog who sneaked out right behind me and then proceeded to prance about in the white stuff. He would not come in when I called. Bill came home and got him in and so Bentley is in trouble today. Here is Bentley out on his adventure. 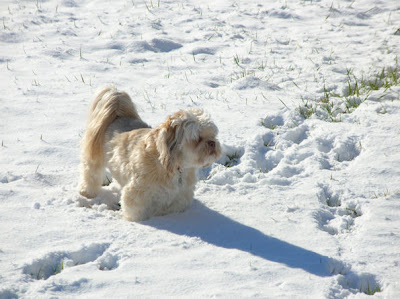 I can't believe how things shut down here either. Driving from DC to Baltimore yesterday afternoon, it wasn't the snow I was worried about - it was the other drivers! I couldn't believe it. We are off to find a shovel today, but as John said, it may be hard to find one as everyone is apt to have bought them yesterday.

Love the pic of Bentley in the snow.