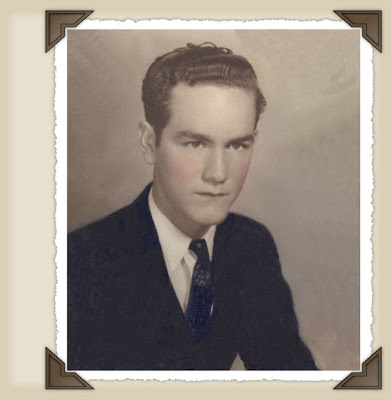 For all of you fathers out there, Happy Fathers Day!!

This picture is of my father when he graduated from high school in 1938. He was very handsome then and remained so through the years. Dad was the sixth of 12 children. There were four girls between him and his older brother. To say that he had those girls number might be an understatement. Besides the good looks and charm exhibited in his early years, Dad was blessed with a beautiful voice and a very wry sense of humor.

He enlisted in the United States Marine Corps in December, 1941. He served in the Pacific Curtain of World War II. He saw action in the battles of Guadalcanal, Iwo Jima and others. Dad never talked much about what he did in the war except for the mention of a battle anniversary or sometimes when he would be upset with "you kids."

Dad did not sing in public after the war and only sometimes with family and friends after that. I always have believed that that was our loss. He did keep his sense of humor which would show at some of the most inopportune (for me) times. He was not raucous, just a few subtle words with a twinkle in his eyes.

My dad was a hard working, everyday guy. He loved to fish, to putter on projects. He learned to sew when I was in junior high school. He was pretty good at that. He discovered woodworking after he retired and made such things as cradles, curio cabinets and cedar chests. For the graduation season of 1995 he made four cedar chests for his four grandchildren who were graduating from high school that year -- Melissa, Robin, Joshua and Erica. Those are cherished pieces by those four as were other pieces made for his other grandchildren.

Dad died in 1996 and did not get to see his youngest grandchild graduate from high school. Dad loved his family deeply. He was proud of all of us but he was absolutely silly over his grandchildren, all ten of them. Through the good times and the bad times the one constant that I have had in my life was knowing that I was loved unconditionally by my father. I was blessed.

What a lovely father's day entry! I love hearing about your family and it is so clear how much you love them all. I especially like it when you include the pictures so I can play the game, "so that's who they look like!"