Sunday at the Kennedy Center

For so very long I have wanted to attend an event at The John F. Kennedy Center for the Performing Arts. Sunday, we were fortunate to attend a concert held in the Concert Hall. The Concert Hall is the largest of the three main performance venues. It is where the Washington Symphonic Orchestra is based. The Opera House is where most theatrical performances are made and is the stage for the annual The Kennedy Center Honors.

The concert was a performance of Gay Men's Chorus of Washington, DC. The band that Erica plays in, Capital Pride Symphonic Band, also performed. It was a very poignant program. The performances were of the highest caliber.

Seeing and hearing a performance at the Kennedy Center is very special as the venue is comfortable and the acoustics are wonderful. It is amazing how much fuller and richer the sounds of the band were coming from this stage. I have written of the band in previous posts and am so glad that Erica is able to continue participating in an activity she loves so very much. Band has been a vital part of her life for a long while now.

Geoff, Bill and I attended the concert and scurried around finding some lunch. Thus, the opportunity for photos was limited. Besides, we were not allowed to take photos in the hall even though I got a couple (not very good). Here are two I took outside the Concert Hall in the Hall of Nations. 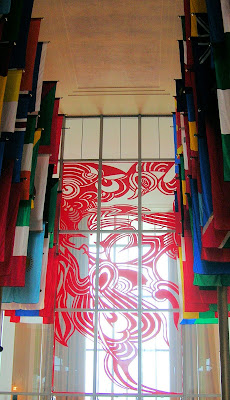 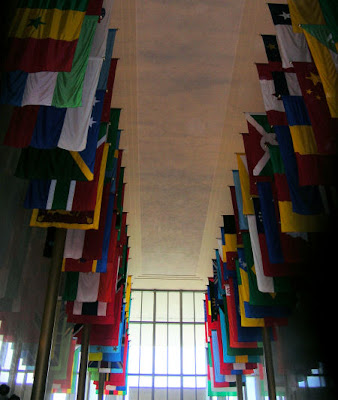 I wish we would have had more time to explore the Center. I was somewhat underwhelmed but not disappointed if that makes any sense. I look forward to visiting again.

You guys are so cool. You don't miss much and have so much to explore and experience back there. Very cool that Erica's band played at the Kennedy Center. What a shame that she turned out to be such a disappointment!! (Kidding, of course!)

Fun reading about the concert - we were so disappointed to miss it. Hopefully the next one we will really be in the area. Mom and I use to go to the KC every year for the nutcracker. I think going in the evening, all dressed up is a much better experience than going during the day. I recently took my cousin during the day for a performance and was also a big underwhelmed.

Well, I kinda liked the Alvin Ailey concert Alexandra and I saw that afternoon, but I've never been there at night...