My friend Terry sent an email yesterday about giving a pill to a cat. It was funny alright. It reminded me of a twice daily adventure we have around here. It is called Herding the Cat starring George and Bentley. In previous posts about our pets I have mentioned that George is diabetic and takes insulin twice a day. She has been on this regiment since the first of the year when she had dropped to five pounds. Well, we have been true to our duty of injecting the insulin as prescribed. She has gotten stronger and once we got Bentley she even got more strong. 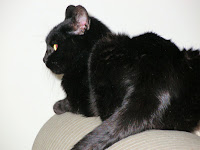 Well, we have had Bentley for four months now and George for 14 years. George has always been aloof and prone to hiding. Bentley still exhibits puppy ways (8 months old) and is not always the best behaved puppy around even though he just got a certificate from obedience school. Finding the cat for her shot has gotten to be an adventure. We have to make sure that all doors to closets are closed and then we search. Bentley has decided that this is great fun and has become a cat herder. All we have to say is, "Find the kitty" and he is off. He finds her, too. As he has grown and she has gotten stronger the races are becoming more dramatic but George is guided to her spot for her shot and Bent is very proud of himself. 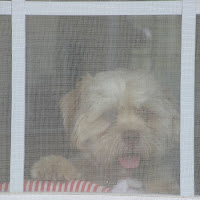 Georgie is much better now. Her insulin is finally at the right dosage and she now weighs 8 1/2 pounds. She is much stronger and is once again her old belligerent self. Bentley is learning "stay" and "come" and sometimes gets them right.

I was so amused by the giving the cat a pill thing because our geriatric cat, Grace, is impossible to pill. I can't even imagine giving her a shot of insulin! I don't think getting a dog would help in our case.