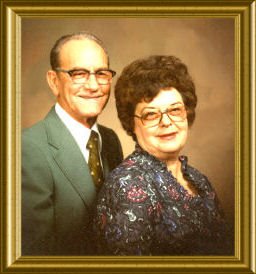 Today would have been my parents 61st wedding anniversary. They were married October 14, 1945. Dad used say with a grin that he jumped right out of one war into another.

One of the loveliest times we had together was when we all gathered to celebrate their 50th anniversary. I wish that I had the pictures from then readily available. All four of their children and their spouses were there. All but three of their 10 grandchildren were there as was their first great grandchild. Mom and Dad were very delighted to be joined by their sisters and brothers and dear old friends. It was a day that meant so much to each of them.

The year that followed would see Dad's health fail markedly and he passed away in December of 1996.

Mom continued for the next few years enjoying family and friends and doing a little traveling that she had not done before. But, mostly she delighted in seeing her family grow. As I write this I believe that there are now 17 great grandchildren -- it gets almost overwhelming when you stop to think. But until just a very few months ago she remembered all of their complete names and their parents too. I think sometimes that she did this not because she could but because she knew how much Dad would have loved bragging about each one of these little souls.

When I go to bed tonight I will say an extra prayer for Mom and Dad. They were good together and they were so good to us.