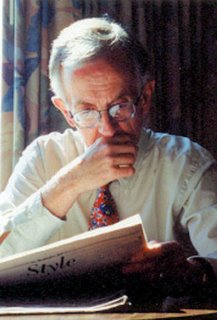 Tomorrow is the day. Yes, Bill is retiring. Need I say that I did not think the day would ever arrive when he would say, "I'm ready, it's time." Well, that day has come and I would like to let the world know that I am proud that he is my spouse and that no matter what this is good.

The first job that I really know anything about was when he was in college and worked a couple of summers at Teton National Park. Bill was working on his degree in Accounting from the University of Utah at that time. After that and after college he enlisted in the Army where he was a member of the finance corps. He was stationed in several places including Fort Mead, Maryland; Fort Benjamin Harris, Indiana; and in South Korea. After his stint in the Army he went to work for Boise Cascade Corporation in Eastern Oregon. From there he transferred to Idaho Division Timber where he was the controller for the division centered in Emmett, Idaho. That was what he was doing when I met and married him.

He took a brief break (five years) from the timber and sawmill industry shortly after we wed. We purchased a small business accounting and consulting firm in LaGrande, Oregon. But, he missed the action of the industry and I believe the smell of sawdust. He went back to work in the industry and has remained there ever since. I am not sure whether it is the type of accounting that lured him or the industry itself. Whatever it is, he has spent over 35 years as an accountant working in an industry that has taken many turns over the last 35 years -- some good and a lot not so good. But, it has taken us to some of the most beautiful places in the country to live and kept us fed.

What can you say about someone who is loyal to a fault, respects and values those with whom he works, knows his place, and always strives to achieve the highest of ethical standards? Not much, other than, it has been quite a ride. It is time now to take a deep breath and move on to do some of those things he has wanted to do more and more -- more volunteer activity, more futzing around in the flowers, more time to walk on the beach, more time to go to a ball game, more time for family.

It will be a quiet walk out that door tomorrow but I hope it is without regrets. He is such a good person and he deserves more than anyone I know to hear the words, "Job, well done."
Posted by Carla at 9:22 AM

Congratulations Bill! You are due for some time with family and friends! Maybe now the Hubbards and Prestons can return to our Christmas morning get togethers....sticky buns anyone?

Best of luck no matter what happens!

Love,
Rachel, Joel and the dogs

This was sent via email from our daughter Erica:
Things about/for work and numbers I learned from my Dad:

*\ functions (I can relate to people who remember when Lotus was the spreadsheet of choice.)

*It takes a lot of time to develop spreadsheets that make sense - but it's easier to pay attention to the details first than when risk become reality.

*There are people behind the numbers - stay late to get the payroll done or your small business vendors.

*Getting things to balance is an art.

*Accounting is logical to a special group of people.

*Commuting is terrible, but sometimes you have to suck it up and go over the mountain.

*Be nice to everyone.

Uncle Bill,
I'm sitting at my desk wishing that I were retiring today, opting to think of you instead of the budget for next year and a pending real estate transaction and the six things that should have been done yesterday and, and, and...

All of those "ands" make me appreciate you all the more today. As a dad, as a husband, as a worker, I know that the road to this day has been a long one. Thanks for being a wonderful role model for me as a father, husband, provider and employee.

I wish you all the best in your retirement and the new adventures that are to come.

(Kelly, Rebecca and Jonathan send their love and congratulations, too!)

Way to go, Bill! We know you are not the kind of guy to just sit around, so I'm sure your retirement will bring new adventures and new interests, and maybe even a new wardrobe! (After all, gardening and bowling in tie and wingtips is just not cool!)

Tonight we will pour us each a glass of something tasty and drink a toast, "to Bill--job well done."

Bill - Best Wishes to you, you provided me with so much help and good times over the many..many..years of sawmills. For that - which you would share time and time again .. I thank you.. I sincerely wish you a very happy and health retirement years.