When I started this blog I intended to focus on my Mom who has not been doing well. I have found it pretty hard to do so because I just cannot stand the fact the she is miserable right now and there just seems to be nothing that any of us can do but to reassure and comfort her. When I came home from visiting her in July I brought back with me some miscellaneous old photos that I had separated out last year with her when I was visiting her. I have gone through the photos now several times and wish that I had the other boxes that I had separated for my sisters, brother and myself. Mine is in storage awaiting an address to ship. There are lots of pictures of folks I have not the slightest clue as to who they are and then there are some real treasures of my parents when they were young and later on as we all grew up.

I like to look at the ones of Mom and think about what she might have done had she been born 30-40 years later. She is the oldest of four children and like me has two sisters and a brother. Her father was killed in an auto/farm machinery accident when she was 11. My grandmother who never remarried worked at the post office from that time until she retired at age 65. So, Mom grew up in this family headed by a single mother. She grew up during the Depression and went to high school during World War II just as parents of my contemporaries.

She grew up in a very small town in south central Idaho. She was active and prided herself in being a good swimmer, skater and basketball player (old half court days). The only problem here was that girls and athletics was not smiled on at that time. Even though she did not continue physical pursuits as she got older, I believe that her abilities and strengths she displayed earlier were instrumental in the care and love (sometimes tough) she gave me as I faced major physical challenges in my early life and thereafter.

This picture is one of Mom when she was in high school. I think that she was a junior when this one was taken. As you can see, she was very attractive and I remember my Dad often saying that she was better looking than any of his daughters. To which I would always think, "Oh, well." 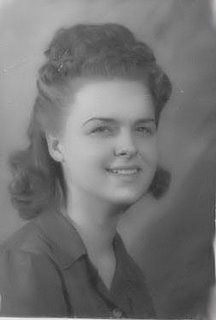 Mom did not go to college but did become a beautician through an apprenticeship program. She always cut our hair and gave us perms when we were kids. Even after we were grown she still maintained a critical eye as to how our hair was cut or not and was never afraid to let us know.

This woman, this mother of mine could be tough as nails and let you know it too. But, somehow that unconditional love was always there. I miss that fight. I miss her saying "It's OK."

What a sweet photo of your Mom. I sure can see a family resemblance to both you and to Erica especially. I am so sorry she is going through such a tough time. I always think how strong she was to have dealt with your polio. I can't imagine anything more terrifying than having your very small child so desperately ill. Yet, I always got the impression that your folks didn't shelter you, but pushed you right out into the world and expected you to use every talent you had and they were, as I remember, awfully proud of all your achievements.

Sending good thoughts and love to you and your Mom.

Wow, you look like your mom and so does Erica. You are all such strong and beautiful women.

Our thoughts and hugs go to you and your Mom.