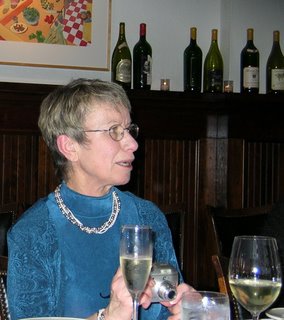 Today is my best friend Robin's 60th birthday. Good for you, you made it!!

Robin and I have been friends for 23 years now. So, you can see that we were not childhood or college friends. We first got acquainted when our children, her son Nathan and my daughter Erica, were in the first grade in Crescent City, California. Our children, including Robin's older daughter Rachel, became fast friends and we discovered that we were truly "kindred spirits."

That "kindred spirit" thing manifested itself very clearly one Saturday afternoon when we played Trivial Pursuit with other friends. I cannot remember the question but at precisely the same time both Robin and I started singing the same song. The song, mind you, was from an obscure operetta that each of us had participated in junior high or high school. The scary thing about this was that Robin went to school in Delaware and I went to school in Idaho.

Our families participated in many activities together and our friendships grew. Bill, Erica and I left Crescent City when Nate and Erica had just completed the fifth grade. A lot of time and a tremendous amount of changes have passed since then but remain we all remain very close. In fact, Robin and I still speak to each other on the every Sunday. Pretty good for a couple of old broads now separated by a continent.

This picture is one taken in February 2005 at the rehearsal dinner for Nathan and his bride Michelle. We journeyed from Washington State to the Napa Valley for the festivities. Erica flew in from Washington, DC and Rachel and her husband Joel came from Massachusettes. It was a happy time for all and was the first time we had all been together since the year before when Robin, Dave and Rachel joined us in Washington, DC for Erica's wedding to Geoff.

So, you can see by this that we have gotten pretty tight over the years. Our children all headed off to the east coast for college -- Rachel to Smith, Nate to West Point, and Erica to Johns Hopkins. We have wonderful memories of those children calling us on the first Thanksgiving dinner they prepared together. We (Robin & Dave and Bill &I) might as well have been there for we all received at least hourly phone calls on what had to be done next.

I could write volumes on what has been a wonderful friendship but I just want to let Robin know how special she is and to let her know that I am looking forward to a point in the next couple of months when I meet her Orleans, Mass. so that we can get our ears pierced (Yes, the first time for both of us) in honor of our 60th year.